London, UK, April 26, 2022 (GLOBE NEWSWIRE) -- Umbria ($UMBR) is pleased to announce the official launch of its Arbitrum bridge, marking the fourth cross-chain bridge to be added to the site this year. 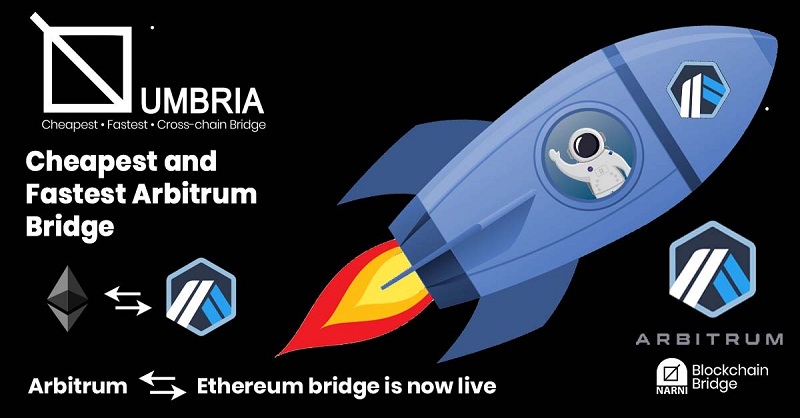 The Narni bridge - https://bridge.umbria.network/ - now facilitates the market’s cheapest and fastest movement of $ETH between the Ethereum Mainnet and Arbitrum One, the chain implementing Arbitrum’s tech. Layer 2 scaling solution Arbitrum currently has $3.72 Billion Total Value Locked (TVL)i, which made it a priority to be included on the Umbria platform alongside its existing stable of cross-chain bridges.

Narni Bridge: Ethereum to Arbitrum One

Narni uses a novel liquidity lending protocol, which hosts liquidity pools of singular assets on different networks. As well as significantly speeding up and reducing the costs of transactions, it generates fee-based rewards for liquidity providers who add a single asset to the bridge. Whenever a participant migrates assets between two cryptocurrency networks using Narni, the liquidity providers receive a share of a 0.2% fee in the native crypto/token they supplied. There are particularly lucrative rewards for anyone staking $UMBR – Umbria’s governance token. These liquidity providers earn their share of a 0.3% fee whenever anyone transfers ANY of the assets supported by the bridge. The APYs can be viewed here: https://bridge.umbria.network/staking-pool/

In addition to Arbitrum, Umbria currently provides the fastest and cheapest bridging from the Ethereum network to the Polygon network, Avalanche network, Binance Smart Chain and Fantom (and vice versa).

“Arbitrum One – an Optimistic Rollup that settles Ethereum transactions off chain - is becoming increasingly popular with NFT and DeFi projects due to its low transaction costs, rapidity and high security,” said Barney Chambers, Co-founder/Co-lead developer of Umbria. “This accelerating demand, which in turn increases demand for cheap and fast solutions for transferring assets, made it a natural choice as the next bridge for integration on our platform. We’re expecting high volumes of bridging between the Ethereum and Arbitrum networks.”

Join Umbria’s next Twitter Space on Thursday, 5th May at 5pm UTC:  https://twitter.com/i/spaces/1rmxPgmabEZJN?s=20

Umbria is looking to reach out to projects on Arbitrum that would benefit from cheap and fast bridging. Any parties interested in a partnership should fill out the Partnership Contact Request form: https://partner.umbria.network/

See the latest data on UMBR on CoinMarketCap and CoinGecko:

Operating within the DeFi and NFT space, Umbria Network enables anyone to migrate cryptocurrency assets across chain cheaply and quickly and earn high APYs on those assets with no impermanent loss.

Umbria’s flagship Narni cross-chain bridge is solving current blockchain interoperability issues. Narni removes the difficulty and expense of moving assets between blockchains and is the fastest and cheapest cross-chain liquidity bridge between the Ethereum and Polygon networks. Narni eliminates the barriers to entry for engaging with DeFi applications and NFTs making them much more accessible to a wider audience.

The Umbria ecosystem, built on Polygon, has three major protocols:

i According to L2 Beat - https://l2beat.com/projects/arbitrum/